I just completed a little project for work (you know - the dayjob that I haven't given up yet).  They wanted to get photos of each member of staff for use in newsletter articles, and being the official company photography bore, of course they came and sought my advice... which was their veiled way of asking me to do it for them.

I convinced them that casual/candid shots at a BBQ, which was their original plan, was probably not going to yield useful pictures of everyone, but if I set up a 'booth' type setting, I could control the lighting and background, and pose everyone in a similar way to get a set of consistent images, with a more professional feel to them. 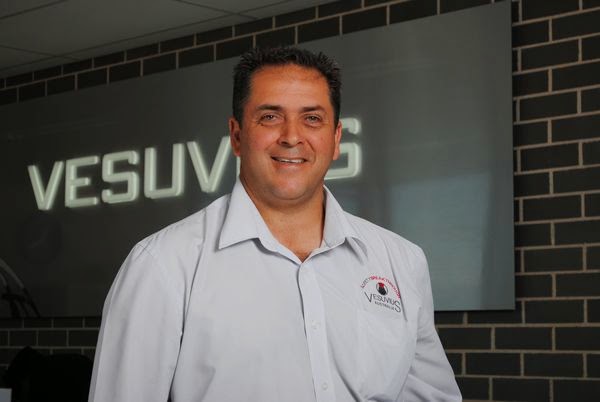 My initial setup was done in our reception area, which has a nice big illuminated sign with the company logo that I wanted to use as a blurred backdrop.  To achieve that, I intended to use my 50mm lens with a big aperture like f/2.  Unfortunately, there wasn't enough space for me to stand far enough back to use the 50, so I had to revert to the kit 18-55 and a much smaller aperture, and have the background more in focus than I really wanted.

I finally got to use my new strobe for this project (see previous post), and also the boom arm to hold my reflector in place.  I used my Cactus V radio triggers to fire the strobe.  With the strobe in a softbox high to my right, and the reflector low to my left, I started off by using Shutter Priority mode at 1/160 to get a base exposure for the background (with the strobe off).  I then reduced that by 1 stop to darken the background a little, and put the settings into Manual mode.  Next, I grabbed a willing volunteer to stand in place while I took some test shots with the strobe on, to get the right exposure for the person, and tweaked the position of strobe and reflector.

Then it was a case of putting an X on the floor for people to stand on, and just getting people through.  I posed them all with their body facing towards the strobe, their face and shoulders halfway back towards me, and then their eyes looking at the lens.  With everyone having roughly the same positioning and pose, it gave a common feel to all the images, and made the lighting easy.  Having a mains powered strobe was a godsend as it recycled in less than a second each time (I was using it on about half power), and power output was consistent for every shot - I could have used one of my speedlights, but would probably have eaten through a set of batteries and ended up with 10 second plus recycle times.  One issue I did face, was that with staff members of varying heights, it wasn't always easy to line them up with the background, and with a few of the taller guys, I was standing on tip-toe to get the shot! 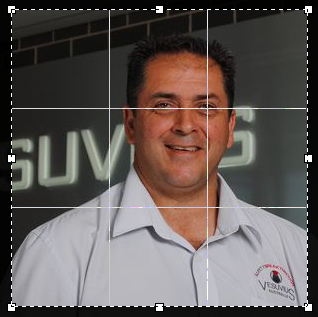 The next thing I did after completing that day's shoot, was to use FastStone Viewer to crop all the images to a square format, and used the rule of thirds grid to help ensure all the photos were of similar proportions.  I positioned their left eye on the upper right intersection, and adjusted the box to give a small clearance above their head.  Any lighting, colour tweaks, and sharpening were also done using FastStone at this point.  The last thing was to resize all the photos to 2000 pixels. I did use Photoshop on just a handful of people, in one case to combine the eyes from one shot with the smile from another, but in most cases, it was to help reduce reflections and shadows caused by glasses.

I got through about 25 people that afternoon, and then set up 2 more shoots in other locations, to get all but a handful (who presumably don't want their photos taken) of the rest.  One location was in the main office area.  I setup the lighting and posed people in exactly the same way, but pulled together a load of potted palms to act as my (distant and unfocused) backdrop.  My final location was out in the factory area.  I was lucky enough to be able to use one of our key machines as a backdrop during a 'down' day, and have that section of the factory cordoned off so we could dispense with all the normal safety gear while doing the photos.  Again, the lighting and poses were kept consistent with the first shoot.

All in all, just under 50 staff photos were produced, and everyone seemed pleased with the results.  It was a very enjoyable project.  My chosen pose and crop may be frowned upon by those that do this kind of thing as their daily bread and butter, but for my first 'corporate' photo shoot, I was very pleased with the outcome.  Now, if only I could have charged them even just $20 per person, I'd have a couple of new lenses now! LOL

Until the next time, happy snappin'.

PS - my thanks to Vito, our HR Manager, for agreeing to let me post his pictures as my examples.
Posted by Grumby at 9:07 PM 1 comment:

Grumby
I am a wannabe photographer who used to have the lack of a camera as an excuse to hide behind. Now my family bought me my own camera, the only things stopping me are a lack of creative vision and ability, so I'm working on them... One day, I hope to sell just one of my photos. UPDATE: that day has come - and I have been paid for TWO photos! Woohoo...